Over Thanksgiving weekend, we found ourselves taking the ferry boat from Seattle to Bainbridge Island. An amazing dose of sunshine prompted me to bust out the "watercolor graphite" and paint passengers, gulls, and landscapes. It was tricky to layer up enough of the graphite to get good darks...but it was rewarding to see the graphite twinkle in the sun! 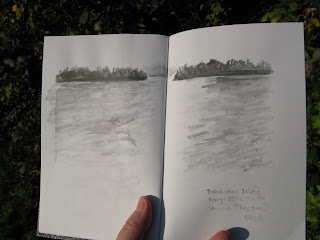 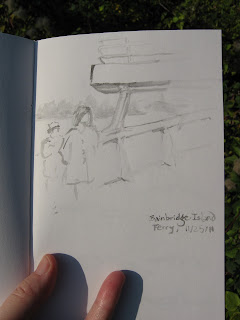 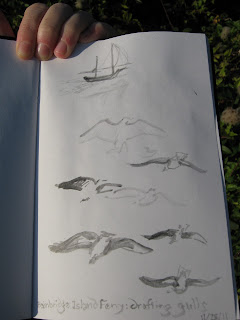 Posted by Katura at 9:59 PM No comments:

Last night I finally met up with Urban Sketchers Portland! We had a nighttime sketching adventure, trying to capture the twinkling of the city during the Christmas Ship Parade. 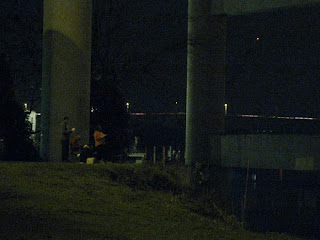 It was certainly dark out, but the lights from the freeway helped give a general glow to our corner of the riverbank. 5 of us came out; those who were traveling by car eventually took refuge in the shelter of their automobiles to warm up, while those of us who get around on foot were happy to tough it out in the open air. (It was a lovely night, really!) 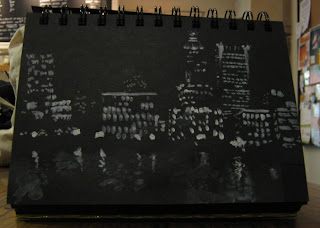 I brought a sketchbook of black paper and a tube of white acrylic paint. First sketch, above--the general view of the skyline of downtown Portland. 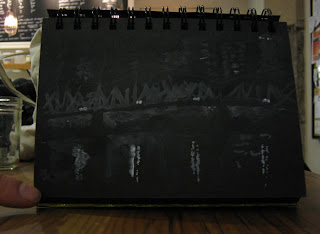 Second sketch: trying to capture the reflections of car headlights as they crossed the Hawthorne Bridge. (Those bridges are a terrible tangle of struts and supports, even with daylight on one's side!) 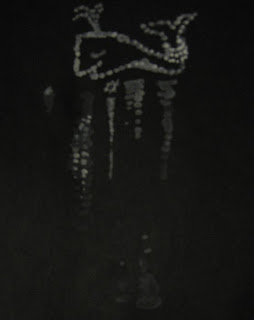 Third sketch: one of the boats was decorated with an adorable whale. Turns out, when they left the marina and were out on the river for the parade itself, that there was a mini-whale tagging along after it! 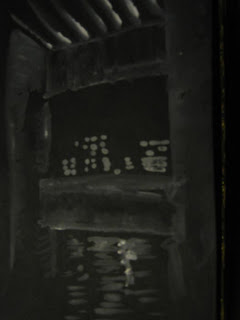 Last sketch of the night: buildings framed through the legs of the freeway bridge. Portland is a very sparkly town, indeed.
Posted by Katura at 8:23 AM 3 comments:

"But now everything was quiet and there was only the flash of sun from the windowpane and the sound of the wood pigeon, like the first strokes of a paint brush on a big sheet of paper when you were still not sure how the picture was going to go."
--Richard Adams, Watership Down
* * *
This is an experiment with switching my sketch-blog over from my original LiveJournal blog. While the old blog goes back to 2006 (!), I've found that the increasing level of paid ads and fishy spam has made me less inclined to virtually hang out over there. So I'm sniffing around on this platform now. We'll see what happens...
Posted by Katura at 10:41 PM No comments: