Meanwhile, on the Other Blog...

One of the exciting things about moving to Portland was being able to join the lively Urban Sketchers group in this town. There's currently a "scavenger hunt" going on where folks are trying to sketch (and post) 30 things around town by September 1st. I've gotten 12 of them done so far, yay! You can track the progress of the whole group over on the Portland Urban Sketchers blog. 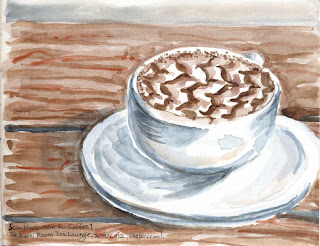 (This is Scavenger Hunt Item #21: Coffee. Many, but not all, of the prompts are related to a sense of Portland's distinct identity.)

My friend T and her family came to visit over Memorial Day weekend. The kids were as excited to see the zoo as I was, hurrah! Lots of fast monotone sketches as our merry group tried to keep sight of each other in the dense holiday crowd.

My friend T's version of the hippo came out delightfully well too. Hooray for adventures with art-nerds and their nerdiness-accommodating families!
Posted by Katura at 9:32 PM 2 comments:

Nice two-hour workshop at the IPRC tonight with B.T. Livermore, talking about letterforms, sign-painting, different tools for hand-lettering, keeping stroke consistent, being inspired by the past. 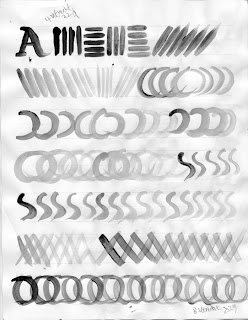 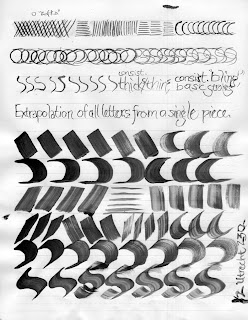 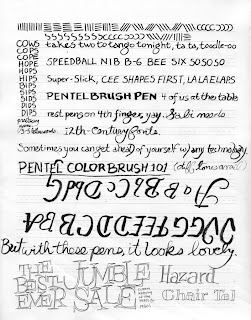 Edited to add: One of the surprises of the class was when four of us students at the south end of the table discovered that we all hold our pens & pencils "wrong" in the same way--with the pen braced against the first knuckle of the ring finger, rather than against the middle finger. I've never met anyone else who does that with their pens, to my knowledge at least--though it's not a thing that often comes up in conversation, it could be more common than I know? Anyway, it was a surprise and a triumph to discover that we were a "gang" of holding-pens-wrong-folk, all sitting next to each other! (Gabi was the most awesomely rebellious, because she does it left-handed.) Anyone else out there hold their pencils funny?
Posted by Katura at 9:34 PM 7 comments:

Last weekend at the zoo, I decided to play with watercolors. How splashy and free-form could I go? (Ah, the salmonberries are blooming, hooray for spring...) 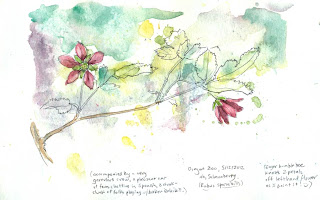 And how dark and contrasty could I go? (Hello, surly cattle egret! What fine plumage you have.) 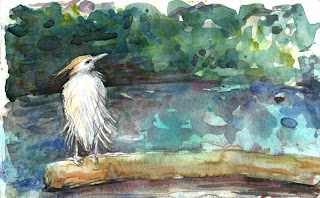 Ultimately, I ended up in the middle somewhere, watching the mature elephants proudly swish their tails while the whippersnapper elephant sprayed water from his trunk and playfully head-butted his elders. 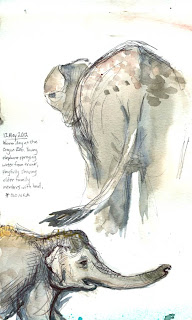 I had a good time painting that day. (See also the hippo and Mount Hood.)
Posted by Katura at 11:11 PM 5 comments:

I have been little bit obsessed with visiting the Oregon Zoo on weekends of late. Partly, it's the sheer gratuitous convenience of it--I haven't lived so close to a zoo since I spent a summer in Washington DC. So yes. Give me a few spare hours on a Saturday afternoon, and you'll very likely see me making a bee-line to the zoo. 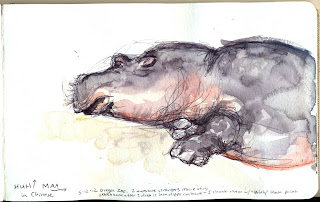 And this past Saturday, there I was at the hippo habitat, and the hippos had hauled out of their pond and were dozing in the sun. I only had 15 minutes until the zoo was going to close, but I really wanted to get the sketch of the hippo in this lovely pose. Boom, whacked out the rough ink outlines, now just need to break out the watercolors and get it painted in...

Mind you, it has been months since I used my watercolors. And the last time we moved, I put my awesome sketching-optimized hip-pack into a box and of course I haven't seen sense. So I'm just fumbling around with a shoulder bag, trying to get my paints and water and brushes all ready, feeling rushed and flustered.

And the next thing I know, the sketchbook has fallen over the fence...right into the hippo enclosure. Whoops.

I couldn't reach it. The lashed-together stakes of bamboo were tall and pokey for reaching over, and too close together to slip a hand through. The tall young woman standing next to me couldn't reach it either. But then her boyfriend gave her a boost, and she performed an incredible (and darned nerve-racking) feat of gymnastics that, amazingly, allowed her to grab the sketchbook. We gaped at each other, stunned, amazed that it had worked. (All the while, passing elementary school students were chatting about how many more people are killed by hippos than by lions each year, too--heightening the sense of danger, indeed!)

In gratitude, I gave the two brave heros one of the "boldly go" cards that I had in my bag. They were delighted--art rescue, art reward.  Perfect.

And, in truth, the hippo sketch really was the best thing I did all day. What a face! 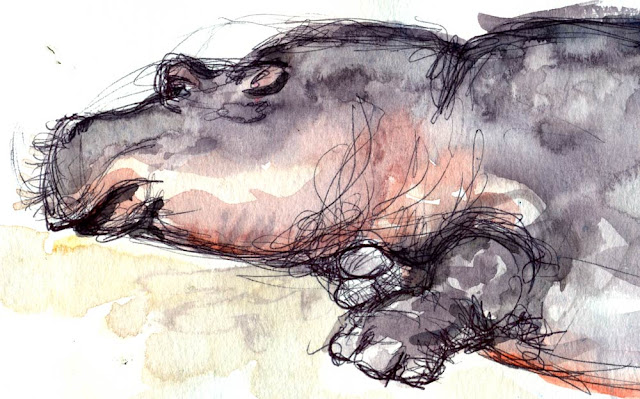 Back in December, I was on a camping trip in the Oregon woods. The fog had cleared for a short time, and I did some experimental sketching of the Douglas fir trees silhouetted against the night sky. Dilute white acrylic paint called out the faint glow of the sky in contrast to the shapes of the dark trees. 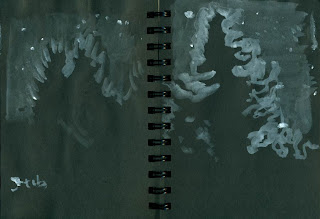 I'd been playing with the idea of pursuing the ideas in this sketch more, but it was just simmering on the back burner for quite a while. Then, a colleague of mine at work, who worked at the museum's planetarium, announced that she was moving out of town. Clearly, the starry sky would be an appropriate theme for her going away card, right? 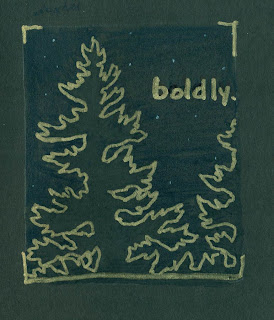 Revisiting and adapting the shapes from the earlier sketches, with gold paint-pen on black paper. The "boldly" caption is, of course, a Star Trek joke--boldly going where no-one has gone before, right? 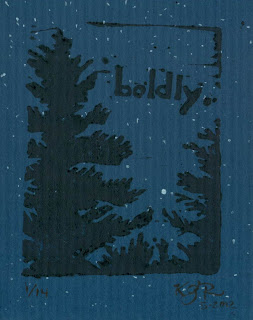 For the final version, I hand drew the stars with a white colored pencil on the blue paper, stippling away in a coffee shop one Saturday afternoon. I carved the design of words and tree into a linoleum block print, and mixed a "nearly black" ink out of blue, purple, and green. The joy of sunny and dry weather in Portland--the ink dries faster that it would have in winter!

I printed a few variants on these, and they'll be wandering through the postal system over the next few days. My planetarium friend enjoyed her hand-delivered copy too--hers was extra special, with a hint of glitter. Yay.
Posted by Katura at 10:58 PM 2 comments:

Enjoyed attending the Dr. Sketchy's Anti-Art School session at the Stumptown Comix Fest last weekend. Was in the lovely company of my friends Isabel and Deb, and we had a good time trying to draw the models who were dressed up as characters from Neil Gaiman's Sandman comics.

Started off on the short poses with a good old black ballpoint pen. Unfussy, wake my hands up a bit. 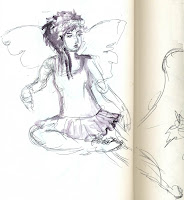 As the poses got longer, I started adding bits of watercolor over the top of the pen lines. Especially useful for those ghostly shadows around the eyes of Dream, doncha know. 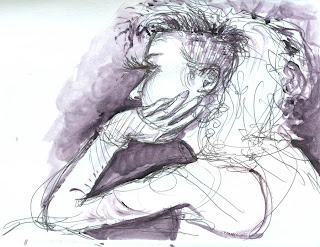 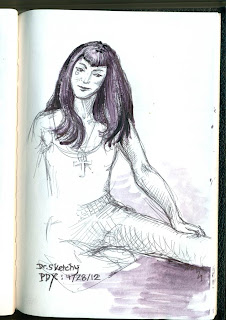 Longer poses brought out more watercolor effects. Ultimately, though, the official models weren't nearly as delightful as one our fellow artists in the crowd--a lovely young woman with her hair curled into bright pink ringlets, wearing a dress that would have made little Bo Peep proud. When she came across the room to get a better view of the Death model, I leaped at the chance to sketch her, too. 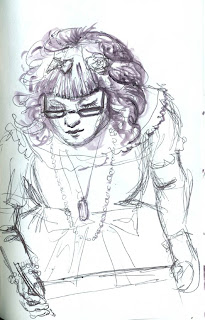 Good fun all around. Thank you, Dr Sketchy.
Posted by Katura at 10:28 PM No comments: