We didn't have a lot of time to visit the National Portrait Gallery during my visit to Washington DC, so at first I didn't do any drawing while there. But two of the paintings stuck with me so much that I went back the next day and got quick sketches of them. 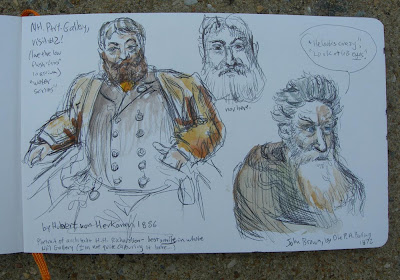 On the left, a portrait of architect H. H. Richardson by artist Hubert von Herkomer. This painting wins my "Best Smile" award--though I completely failed to capture the charm of the original painting in this fast sketch, even though I tried twice. (With the giant beard, the warm smile comes through all in the eyes...)

On the right, the portrait of abolitionist John Brown won my "Crazy Eyes" award. Not to mention the crazy hair. It was fun listening to people comment on the painting as they walked by.
Posted by Katura at 10:04 PM No comments:

Have I mentioned the fact that I love libraries? I love them so much. It was delightful to get back and visit the Library of Congress during our DC trip. * Debo mencionar que a mí me encantan la bibiotecas. Me fascinan, en realidad. Así que estaba muy entusiamada a visitar el Library of Congress durante nuesto viaje a Washington DC. 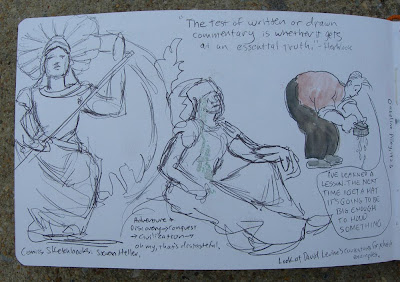 National Museum of the American Indian

I had never seen the National Museum of the American Indian before. It was still under construction when I was last in DC. The curving form of the building was so striking that I had to to a sketch before we went in. * Nunca había visitado el Museo Nacional del Indio Americano antes; todavía estaban construyéndolo cuando estaba en DC hace 10 años. Las formas ondulantes del edificio son muy impresionantes- tuve que pintarla rapidamente antes de entrar. 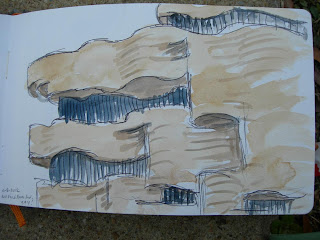 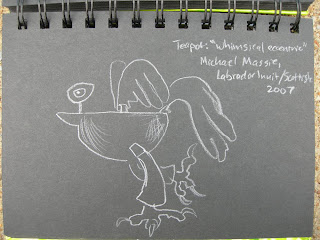 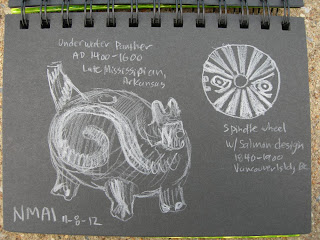 I am a sucker for sculptures of animals, and they had a wonderful display of them on the top floor. There was a school group that came to that area shortly after I did, and they were so engaged that even with all my sketching time, I moved on earlier than they did! * Me encantan las esculturas de animales, y hay una colección de estas muy encantadora. Un groupo de estudiantes jovenes llegó a verlos un poco después de mi, y estaban tan fascinadas que--aunque yo pasé bastante tiempo en dibujar--todavía estaban charlando y discutiendo cuando yo fuí a ver la próxima cosa. 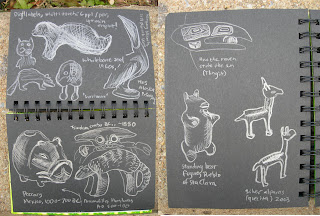 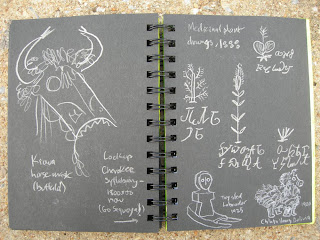 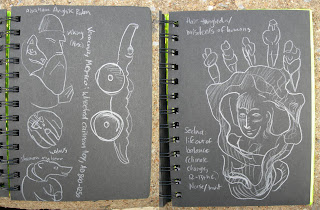 On this recent visit to the Smithsonian Institute, most of my time at the Natural History museum was spent in the lectures about Mark Catesby. But we did get a chance to scamper through the fossil displays at the lunch break. * Cuando visité el museo de historia natural del instituto Smithsonian, pasé la mayoría de mi tiempo en el simposio sobre Mark Catesby. Pero sí logramos una visita muy rápida a los fósiles enormes, durante el almuerzo.

Posted by Katura at 8:05 PM No comments: 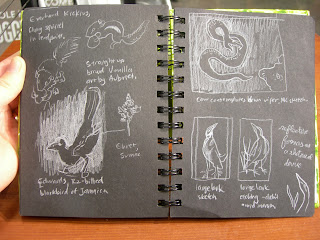 My recent trip to Washington DC was triggered by an interesting day of free lectures. Mark Catesby was a scientist and an artist who published one of the first books about plants and animals of North America, Natural History of Carolina, Florida and the Bahama Islands, starting in 1729. As it turns out, he was heavily influenced by another favorite illustrator of mine, Maria Sybilla Merian--no wonder I like his work so much. 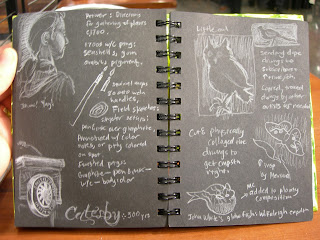 I met up with my wonderful friend Ikumi Kayama for the day of lectures at the Smithsonian's National Museum of Natural History. The topics included techniques for drawing, printing, bookbinding, and self-publishing in the 18th century, as well as the science behind the plants and animals depicted in Catesby's amazing two-volume work. 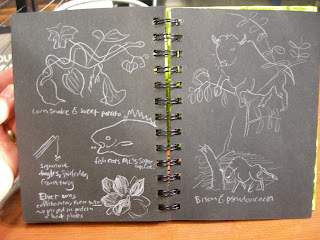 It was eye-opening to learn that after 4 years of gathering research, the book itself took 20 years for Catesby to produce. He didn't have funds to hire a professional engraver, so he engraved all the plates and hand-painted them each afterwards. 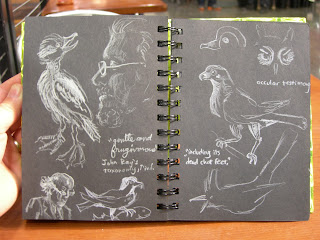 We were entertained by some of the strange myths that other science books of the time were publishing about wildlife in North America: the idea that turtles can hunt by slamming shut their carapaces on neck of a snake to chop its head off; or the idea that rattlesnakes can hypnotize a squirrel and make it run down a tree right into the snake's mouth, for example. 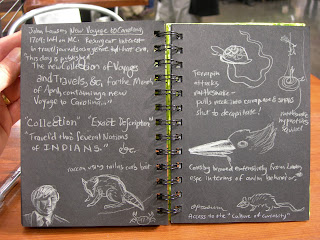 We were thrilled to look at an actual copy of one of the original books after the lectures wrapped up. A very exciting day for me, all told! 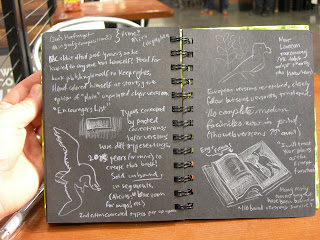 There and Back Again

Just returned from a wonderful week in Washington, DC. I drew a lot, and am working on organizing it all into coherent mini-stories. In the meantime, here's a sampling of the transit fun we had on the trip: bus, subway, and bike-share on the east coast, plus the ticket from the MAX train that got us home from the airport when we got back to Portland.  * Acabo de regresar de un viaje muy divertida a Washington, DC. Dibujé mucho, y voy a organizar todo eso en un serie de cuentos cortos y entendibles. Para ahora, aquí hay unos ejemplares de los modos de tránsito que usabamos: autobús, metro, y bicicletas compartidas; y luego el MAX que nos llevó del aeropuerto de PDX a nuestro hogar.