Last weekend I stopped by to visit the annual picnic of the Philippine American Association in Eugene, Oregon. The picnic was in lovely Alton Baker Park, with a stunning view of the river. Since I was running early, I paused to sketch the river flowing behind the fountain at EWEB Plaza. 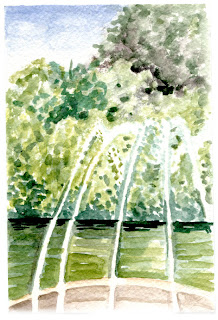 I was initially quite focused on getting the angles of all those jets of water without drawing anything out in pencil first. But when I reached the end of the sketch, I realized I had forgotten to add the segment of the watery cascade where each of the parabolas meets in the middle and falls back down to earth. Whoops! It should probably have looked something like this instead: 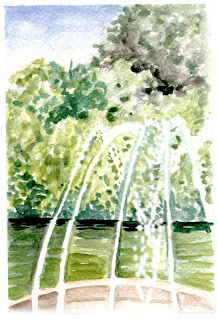 Ah well. I hiked across the pedestrian bridge and plugged myself into the picnic, and had a lovely time sketching the pig roasting on the spit! Tricky timing challenge to throw down more paint every time the pig rotated to this angle, but it was a fun challenge. 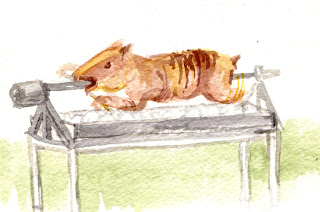 I had some lovely conversations about art and art education with folks at the picnic while I sketched. One fellow, who had been a professor of art before retirement, introduced me to a very insightful quote from James Johnson Sweeney:


"Creativity, in both science and art, is the ability to find new relationships between things that hadn't previously existed. It's the relationships, not the things, that are interesting."

Posted by Katura at 8:24 PM No comments: 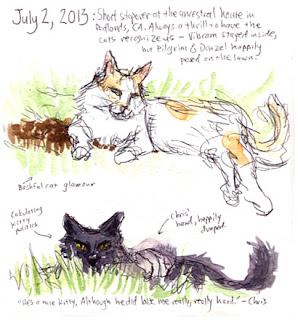 The first chance was when we stopped at my parent's house. Their kitties are not offended when I skip the conversation in favor of the paints! * La primera vez fue cuando nos paramos en la casa de mis padres. ¡Los gatos no son ofendidos si agarro las acuarelas en vez de conversar! 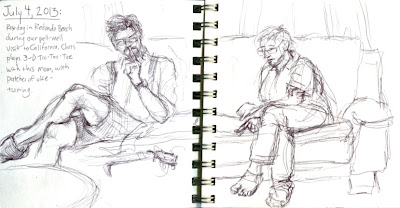 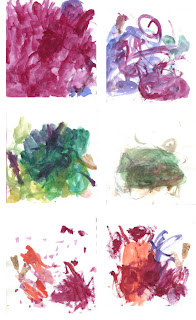 But I don't mean to complain--I had a lovely time seeing folks, and it was very relaxing all around. Plus, my little 3-year-old niece got a chance to do some serious painting with my watercolors while we waited for dinner! It's a delight to see how much she seemed to learn with each stroke of the brush. Inspiring. * Pero no debo quejarme--era un gran placer visitar con todos, y me relajé mucho. Ademas, ¡mi nieta de 3 años tuvo la oportunidad de hacer un serie de pinturas con mis acuarelas mientras esperamos la cena en un restaurante! Me encanta ver cuánto ella aprendió con cada paso del pincel--qué inspiración.